Guiding Principles for Fighting Grave Marginalization YA in Italy 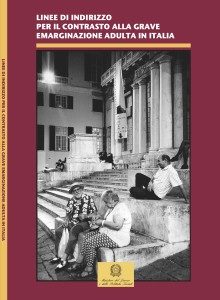 The Guiding Principles for Fighting Grave Marginalization YA in Italy They are the first official planning document in the extremely marginalized sector Government, Regions and local authorities are called to follow for investing public funds in services and innovative housing strategies, in what is emerging as the First National Plan for the Fight against Poverty.

The fio.PSD It conducts meetings throughout Italy for illustration and promotion of Lines

The 10 December 2015 Data were presented the Follow Up Survey of the Homeless, fruit of 5.000 interviews conducted by the 21 November to 20 December 2014 from over 1.000 volunteers throughout Italy

The fio.PSD is committed gives 30 years in the human and social promotion of homeless people and in the design and implementation of research time, study and training on homelessness issues and the serious marginalization.

We realize for years training for the Regions, municipalities, Organizations profit and non-profit, religious bodies etc who want to explore the issues related to the severe marginalization and intervention approaches. To do so we use the wealth of knowledge gained thanks to the two editions (2011 e 2014) of the Survey on Homeless in Italy e the Survey on Services Grave Margins edited by fio.PSD, State, Ministry of Labour and Social Policy and Italian Caritas.

from 2016 we start specific support paths for all those organizations who want to integrate into their policies the guidelines provided in Guiding Principles for Fighting Grave Marginalization YA (Ministry of Labour and Social Policies) fio.PSD which oversaw the drafting.

The Fed in recent months, He took the big occasion of the 62nd edition of the TaorminaFilmFest (11 June 2016) and 73rd Venice Film Festival in Venice (3 September 2016), to put the spotlight on the problem of homelessness through the launch of the social communication campaign #HomelessZero.

To Venice, the Minister for Labour and Social Policy, Giuliano Poletti present with the President of fio.PSD, Cristina Avonto, as well as presenting the campaign commercials #HomelessZero, they lent the face and voice many actors (over Richard Gere also Susan Sarandon e Iain Glen e many Italian actors), He has anticipated the publication of Proclamation to fund projects housing first for the homeless to be realized in the period 2016-2019.

Support yourself the campaign